Ana Botín was appointed Executive Chair of Banco Santander in September 2014. Today, Santander is one of the most profitable and efficient banks among its peers, serving over 148 million individual customers and companies across Europe, North America and South America.

During the COVID crisis, Santander has been lending an average of more than a €1bn per day to support businesses, while helping more than 6 million customers through the provision of loan moratoria and other measures.

Under Ana’s leadership, Santander is undergoing an ambitious digital transformation: its digital banking franchise, Openbank is already the largest digital bank in Europe by assets, and Santander has leveraged its scale and technology leadership in payments to create PagoNxt.

Meanwhile, Santander is supporting the transition to the green economy, being one of the largest lenders to renewable energy in the world, and is a supporter of the UN’s Collective Commitment on Climate Action.

Ana began her career at JPMorgan in New York. In 1988 she joined Santander to lead the Group’s expansion in Latin America. In 2002, she became Chief Executive of Banesto in Spain, before becoming CEO of Santander UK in 2010.

Ms Botín is the President of the European Banking Federation, is a Board member of the Coca-Cola Company and a member of the MIT CEO Advisory Board. She is also the founder and Chair of both Fundación CyD, which supports Spanish universities’ contribution to economic and social development, and Empieza por Educar, the Spanish affiliate of Teach for All, that trains talented graduates to become teachers.

Ana Botín earned her BA in Economics from Bryn Mawr College and is married with three sons. 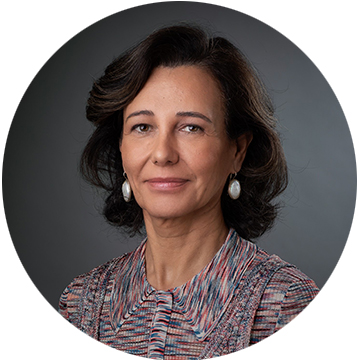