Ranked by Forbes Magazine as a “Web Celeb”, Jimmy Donal Wales is a U.S. Internet entrepreneur, wiki pioneer, and technology visionary, who is best known as the Founder of Wikipedia, an international collaborative free content encyclopedia on the Internet, and the Wikimedia Foundation. He is also the founder of WikiTribune, a groundbreaking ad-free news platform that produces evidence-based journalism, and co-founder of Wikia, a privately owned free web hosting service he set up in 2004.

In 2003, Mr. Wales founded the Wikimedia Foundation, a nonprofit charitable organization dedicated to encouraging the growth, development and distribution of free, multilingual content, and to providing the full content of these wiki-based projects to the public free of charge. The Wikimedia Foundation operates some of the largest collaboratively edited reference projects in the world, including Wikipedia, the 5th most popular website in the world.

In 2017, Wales founded WikiTribune, an ad-free global news platform that aims to address the idea that “the news is broken and we can fix it.” By pairing standards-based journalism with a team of dedicated community contributors and a crowdfunded business model.

Mr. Wales is a Fellow of the Berkman Center for Internet & Society at Harvard Law School. He serves on the Board of Directors of Socialtext, a provider of wiki technology to businesses and the non-profit organization Creative Commons. Mr. Wales has received an honorary doctorate from numerous academic institutions, including Knox College of Illinois where he was presented with a Pioneer Award from the Electronic Frontier Foundation, and Maastricht University, where he received the Common Wealth Award of Distinguished Service. 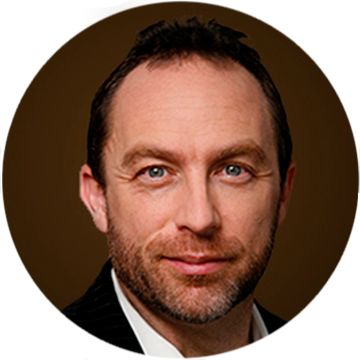