Radosław (Radek) Sikorski is a senior statesman and noted commentator and speaker on geopolitics.  In 2019, he was elected as a member of the European Parliament.   He is Chairman of the EU-US delegation for the Parliament.  He is also a Member of the Committee on Foreign Affairs (AFET), the Special Committee on Artificial Intelligence in a Digital Age (AIDA) and the Subcommittee on Security and Defense (SEDE).

Mr. Sikorski was Poland’s Minister of Defence (2005–2007), Foreign Minister (2007–2014), and Speaker of Parliament (Marshall of the Sejm) (2014–2015). As Minister of Foreign Affairs, Mr. Sikorski was the Polish signatory of the Treaty of Lisbon, in 2007. Together with Carl Bildt, he launched the EU Eastern Partnership. He proposed and helped to set up the European Endowment for Democracy.  He negotiated and signed the Poland-Russia regional visa-free regime, Poland-U.S. missile defence agreement, and—together with foreign ministers of Germany and France—the accord between the pro-EU opposition and Ukrainian president Viktor Yanukovych in 2013.

In his earlier career, he worked as a journalist and is the author of several books on history and politics.   Foreign Policy named him one of its 100 global thinkers for “telling the truth even when it’s not diplomatic.”.  He is a member of the Steering Committee for the Bilderberg Group.  He is associated with the Brzezinski Institute on Geostrategy at CSIS – Centre for Strategic and International Studies and is a senior fellow at the Center of European Studies at Harvard University. 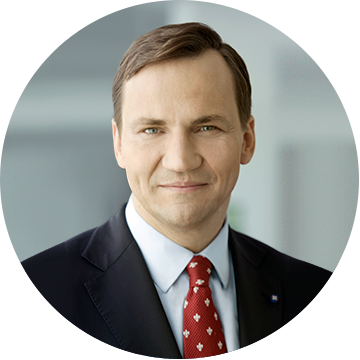