A champion of peace and justice in the world, Dominique de Villepin was the voice of France and the International community during the Iraq crisis. He is one of the foremost advocates of a new global governance based on multilateralism, and a reformist leader in French, European and global policy

Throughout his career as a diplomat, Minister of Foreign Affairs (2002 - 2004), Minister of the Interior (2004 - 2005) then Prime Minister (2005 - 2007), Dominique de Villepin has worked to formulate strategies and find solutions to deal with problems and conflicts, from the violence in the suburbs of French cities, which he brought under control by invoking a state of emergency at the end of 2005, to the regional conflicts of Africa and the Middle East. In France, he led the "battle for jobs" that produced a historic reduction of the unenmployment rate by nearly 20%

Dominique de Villepin, who was born in North Africa and grew up in South America, is a man of both the Northern and Southern hemispheres who is keen to build bridges between these two worlds. He is also a man with a political and itellectual mission, which he has brought to the world stage and written about in political, historical and literary works: to defend and ambitious and original vision of man and his constantly changing world.

He is and advocate for the defense of identity and the dialogue of cultures, both of which are indispensable requirements for peace and stabillity. 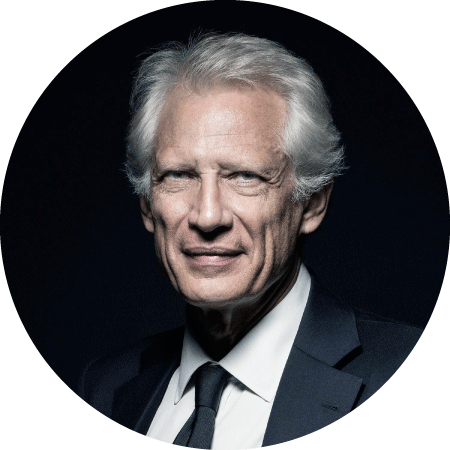