Doctor in Sociology and Professor Emeritus at the University of São Paulo, Cardoso is an eminent public intellectual whose work spans the fields of sociology, political science, and economics.

In the seventies, Cardoso played a leading role in Brazil’s democratic resistance to authoritarian rule. Exiled for his opposition to Brazil’s military dictatorship, Cardoso was deputy director at the UN Latin American Institute for Economic and Social Planning in Santiago, Chile and university professor in Europe and the US.

With the restoration of democracy Cardoso was elected Senator for the state of São Paulo in 1982. Founder of the Brazilian Social Democratic Party, he served as Minister of Foreign Relations in 1992/93 and Minister of Finance in 1993/94. In 1995 he assumed the presidency of an unequal country with an unstable economy, and transformed Brazil into an open and prosperous nation.

Professor at the universities of Santiago de Chile, of Stanford, Berkeley and Brown (at the US), Cambridge (United Kingdom), Paris-Nanterre, École de Hautes Études en Sciences Sociales and Collège de France, he was awarded more than 20 Honoris Causa degrees for his academic work.

Foreign Honorary Member of the American Academy of Arts and Sciences. First recipient of UNDP’s “Mahbub ul Haq Award for Outstanding Contribution to Human Development” (2002), the “J. William Fullbright Prize for International Understanding” (2003) and The John W. Kluge Prize for Lifetime Achievement in the humanities and social sciences (2012).

Founder and president of the Fernando Henrique Cardoso’s Foundation. Former president of the Club of Madrid, the Interamerican Dialogue, the Independent Panel on the UN and Civil Society, the Global Commissions on Drug Policies and on HIV and the Law. A founding member of the Elders, group of world leaders convened in 2007 by Nelson Mandela, he is presently an Elders Emeritus.

Born on June 18, 1931, married to anthropologist Ruth Cardoso, Cardoso has one son and two daughters. From academic research on the impact of slavery and the obstacles to economic development to his political engagement to strengthen democratic global governance, Cardoso’s intellectual and political energy has been dedicated to the cause of freedom and humanistic values. 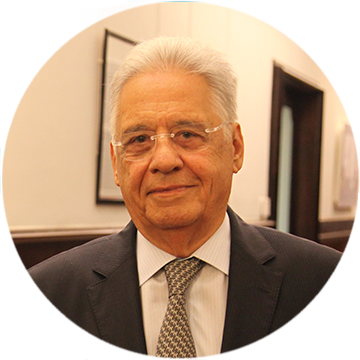