Minister of Economic Affairs, Industry and Competitiveness, Government of Spain

Mr. De Guindos has been the Minister of Economics and Competitiveness since December 2011 under the presidency of Mr. Mariano Rajoy. Mr. de Guindos has also been considered to chair the Eurogroup in a number of occasions with no conclusive results. Since 2016 he is the Minister of Economic Affairs, Industry and Competitiveness.

Mr. de Guindos has in depth knowledge and experience on finance and economics, both in the private and public sector. In his time heading the Ministry of Economics, Mr. De Guindos has dealt with the harshest financial and economic crisis playing and important role in the resolution and restructuring of the Spanish financial and banking systems.

Luis de Guindos started his political career in 1996, when his current party (Partido Popular) took office with José María Aznar as President. During Aznar’s government he was appointed General Director of Economic Policy and Protection of Competition as well a member of the board of Renfe (Spanish railway services) and the Official Credit Institute (IOC). Mr. de Guindos was later appointed State Secretary for Economic Affairs. 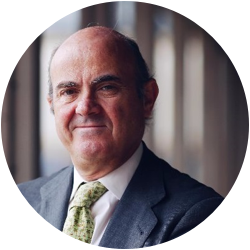